The war of virtual reality headsets 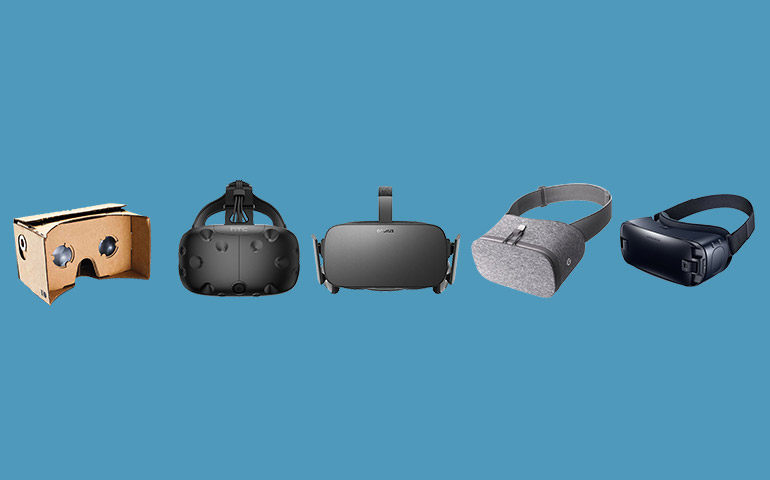 In the past couple of years, virtual reality has gained much hype among businesses and made tremendous strides to provide immersive VR experiences.

Virtual Reality is poised to make a big impact on marketing in 2017. Smart B2C and B2B brands will be on the forefront of the movement, leveraging VR for marketing and exploring best practices, and will continue to look for new ways to use it in the future. – Marketo

If the VR industry continues to grow at this pace, it can assist companies and end users to witness an exciting future that makes use of VR technologies to its fullest. A lot of companies have already started using virtual reality headsets to expand their business and provide a better customer experience.

Okay, so you decide to embrace VR technology or virtual reality apps, what’s next? Out of a dozen VR headsets that are available in the market, you need to pick the one that works for you. So, how do you know which headset to choose? We are here to help.

Here are some of the most popular and functional virtual reality headsets that you can use for your VR endeavors:

With Cardboard, Google was the first to bring simple and affordable VR experience to the masses. Google also made the specifications of the headset available to everyone, so other companies can also make their own version of Cardboard-like VR headset by following Google’s guidelines. Cardboard was like Google was splashing around in the virtual reality kiddie pool.

After making a VR headset with corrugated cardboard, magnets, and plastic lenses; Google launched another VR headset – Daydream View. The new headset costs $79 and is an improved version of Cardboard, basically a Cardboard for grownups that can blend with their wardrobe. (It’s wrapped in fabric!) Daydream comes with a hybrid remote/motion control and it pairs with any compatible smartphone using NFC. Daydream compatible smartphones include the very obvious Google Pixel, and some of the Samsung, Huawei, Motorola, and ZTE phones.

Samsung Gear VR makes use of smartphone as a screen and as a processor, providing you a truly wireless experience. The device comes with a built-in camera that can scan the view of users’ surrounding, similar to what is provided by Vive. Samsung’s VR headset is also equipped with a number of controls on its right side through which you can move through apps, menus, and games with ease. The added benefit that Samsung offers with this wireless headset is that you won’t need to wear your glasses while using it, as its nifty focus adjustment wheel will allow you to tweak the vision as per your prescription.

Gear VR leverages the technology of Oculus VR; however it isn’t as powerful as Rift. Gear VR costs $99, which is great for VR newcomers who don’t want to be tied to any high-end computer while exploring the virtual world. Gear VR will need a compatible Galaxy smartphone to function.

Oculus was the first one to blow the lid off the concept of VR headsets. Within a few years of its first crowdsourcing campaign, Oculus Rift has become the most popular VR device and is already a division of Facebook. Since it first launched in 2012, it has come a long way to provide its users with a lot of non-gaming benefits.

Rift comes with 90Hz refresh rate and offers positional tracking, wireless controllers, room-scale boundaries, and 360-degree tracking. Oculus Rift is priced at $600, in addition to the cost of the compatible PC that is required for an ideal VR experience. It also provides a motion controller and tracking system for an additional price of $199 and $79 respectively. Being a part of the Zuckerberg-led company, Rift is going to provide the first-hand experience of how Facebook will make virtual reality more social.

Vive is the by-product of partnership between HTC and the games company Valve. HTC Vive has some of the most unique features when compared to the remaining VR headsets in the list. Vive is the direct competitor of Oculus Rift, which comes with a base station and two wireless controllers. This top-notch VR device allows users to move around, thus eliminating the only limitation of the VR devices, which is to remain seated during the experience.

Vive comes with Lighthouse tracking technology, which maps the room and creates a virtual surrounding through which users can move. The device proves to be a complete VR solution with inclusion of these base stations and two wireless controllers. Apparently, all these fancy features are coming with a higher price tag of $900. Users will also need a powerful PC to set up the Vive experience, minimum requirements of which are similar to its rival Oculus Rift. Vive has also announced the launch of a standalone VR device later this year, to deliver an unparalleled VR experience.

Softweb Solutions can get you started with VR solutions for business, by identifying your specific requirements and developing VR applications for the suitable VR device. If you want to know how use of VR devices will transform your enterprise, get in touch with our team.