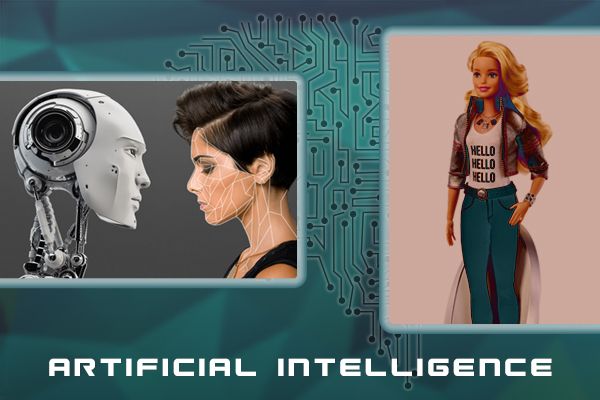 Artificial intelligence is a field that has wide ranging applications across various industries as we saw in the first part of this series. Here are five other interesting uses of AI which will show you that with the right idea, there’s literally no limit on what is possible with the technology. 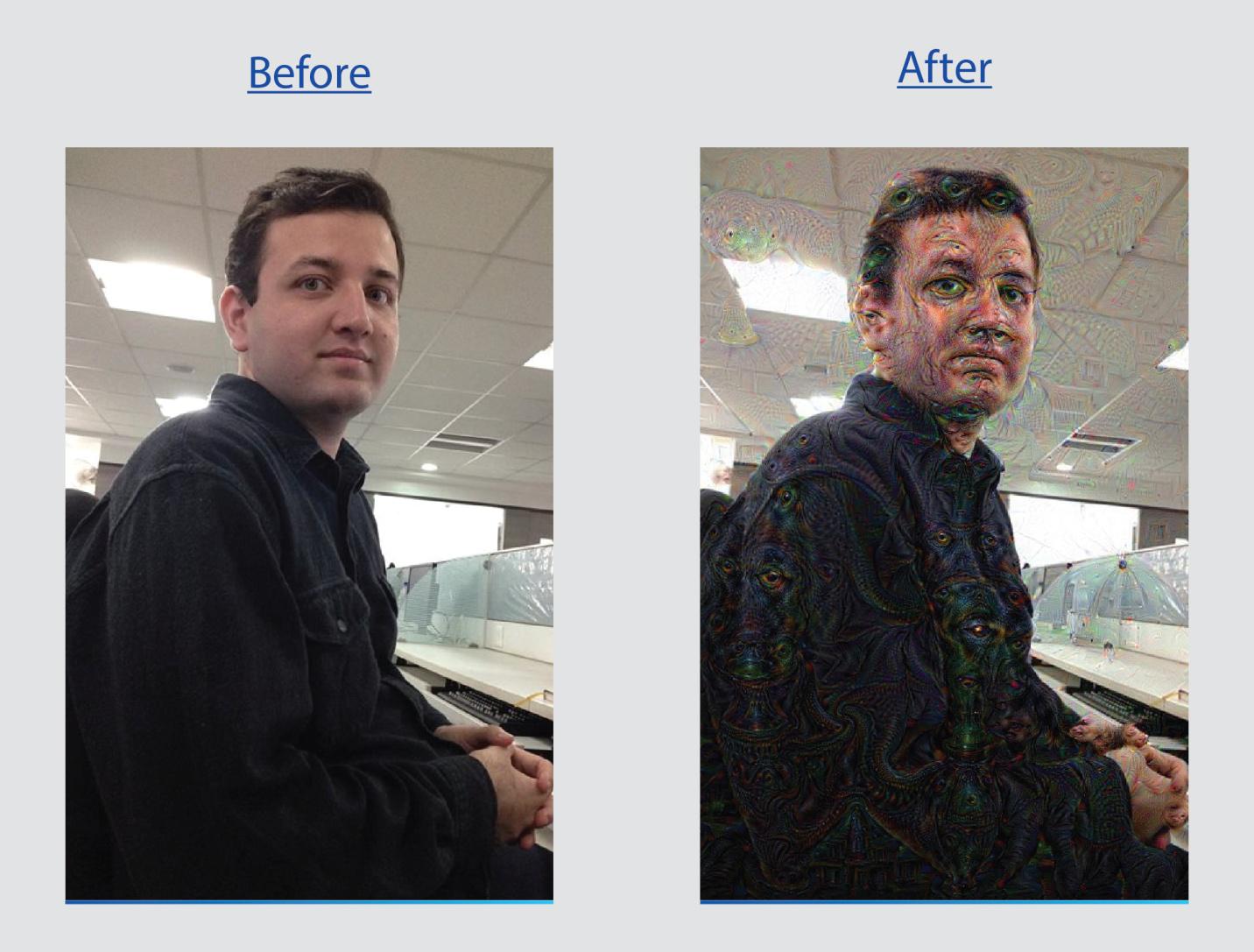 Have you ever wondered how an artificial neural network sees the world?

Well, now you can with Google DeepDream.

DeepDream is made up of artificial neural networks (ANNs). This means that a computer is running stacked layers of artificial neurons which are used to process images. Each of the 10-30 layers that make up the network extract information from the image and learns what makes a fork, a fork, or a dumbbell, a dumbbell. The process involves feeding the machine millions of images of one object. The more images given to it to train on, the more accurately it will be able to identify and classify the image.

Google’s programmers realized that this same process can also be used to ask DeepDream to create images. The company made DeepDream’s code open source in July 2015 and now there are websites that are using the technology to create neural network inspired images. One such site is Psychic VR Lab, which I have used to generate my image. As you can see in the right side image, DeepDream accentuates objects that it recognizes in the photo with the result being that as of now most people end up having their eyes cover their bodies! If you look more closely, you can also identify dog faces in the photo, since this particular algorithm was trained mostly with dog images.

The main aim of this experiment is to understand how artificial neural networks carry out classification and improve them.

2. Creating a safer cyberspace for children 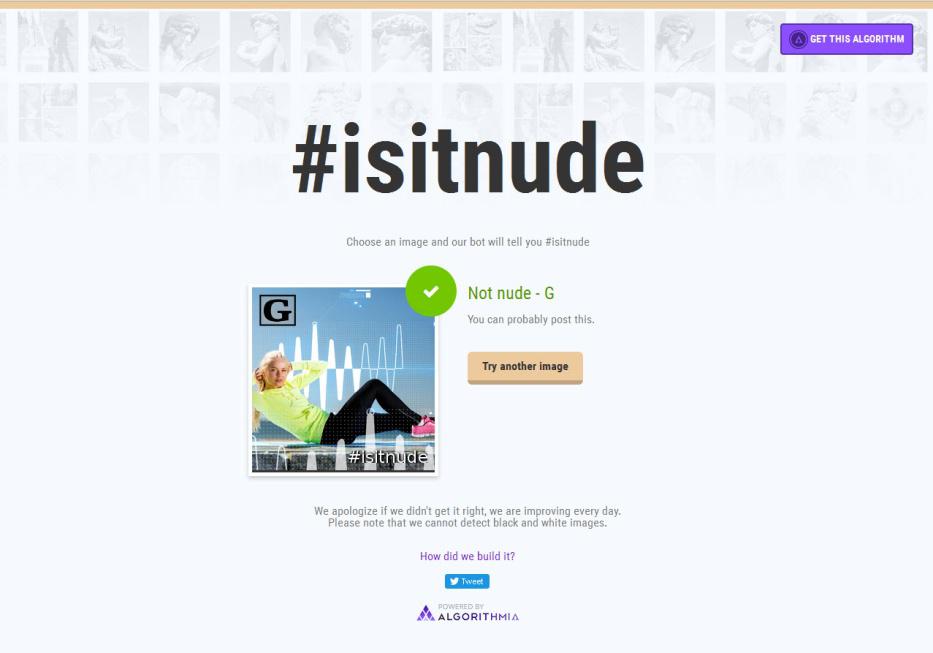 Image recognition software that tells you if the image contains nudity might seem unnecessary. After all, who doesn’t know what nudity is? But what if you need to create a cyber filter to keep the nasty stuff out of your home?

This is where algorithms come in. The process works in the same way as other image classification tools. One such tool is Isitnude.com which uses Nude.py and an algorithm for nudity detection. You can upload any image and the website will give it a MPAA-styled rating. As you can see in the image used above, it was given an appropriate G rating by the website.

The process involves identifying nudity based on skin tone. But although the tool is still far from perfect (there are some R-rated images that do slip through), the technology is getting better at this type of image classification.

Software that can be used to identify images based on nudity can be a useful tool for not just parents but also for schools, enterprises or someone running an online community where nudity and racy material is not tolerated.

The same process can also be used to identify hate material as well as illegal content; all it takes is a smart algorithm. 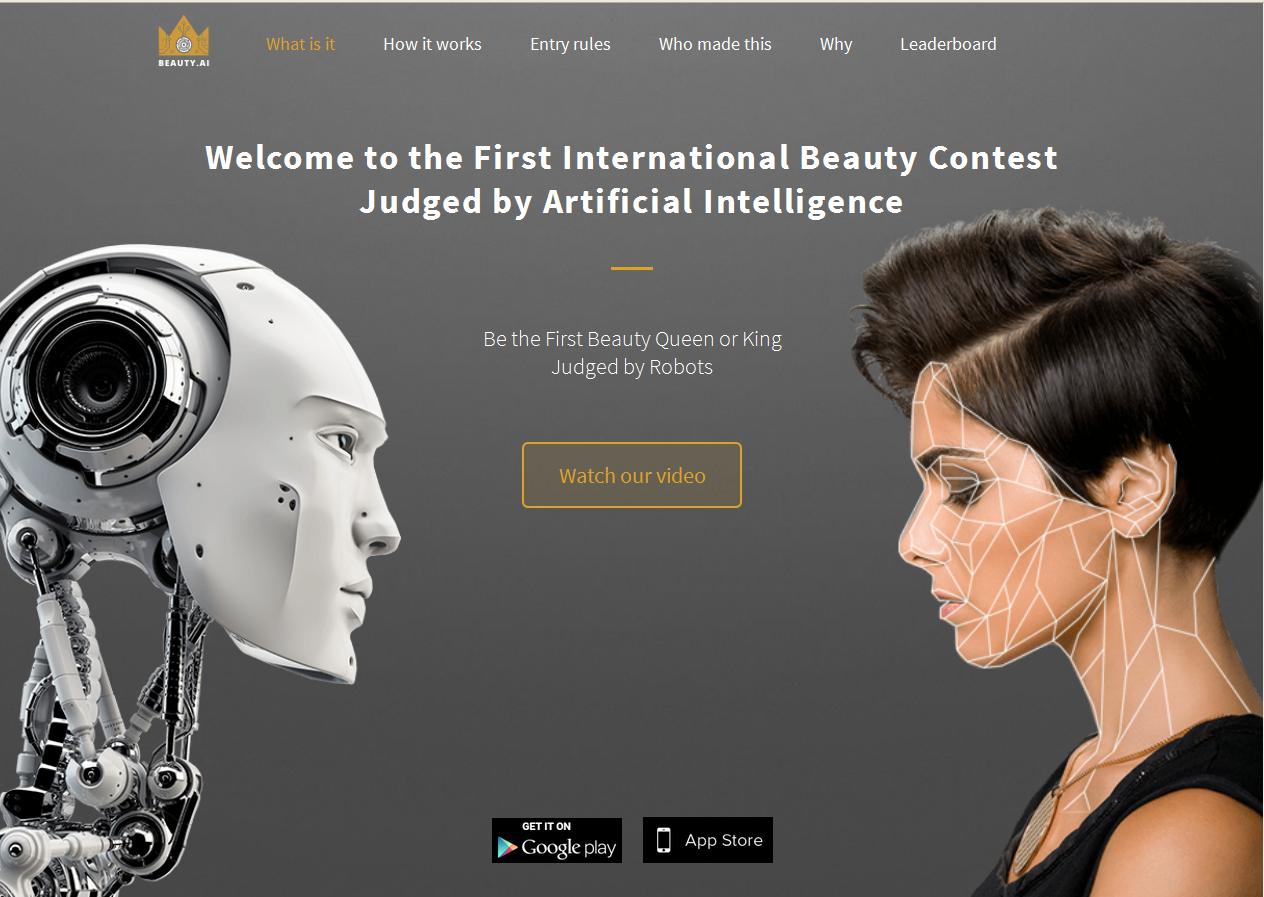 Since there are already algorithms that can detect age and faces, it seems logical that there should be an algorithm that can evaluate beauty. One such initiative is Beauty.ai, where both men and women are encouraged to upload their photos which will be judged by a “robot jury”. The robots in question are actually algorithms and the website is asking data scientists to submit their algorithms for consideration in the jury panel. In fact the contest is geared more towards data scientists than future beauty queens. The robot jury challenge terms state that data scientists will be expected to use deep neural networks to evaluate wrinkles, face symmetry, skin color, gender, age group and ethnicity.

The contest may seem like an experiment in testing how far algorithms can go when it comes to facial recognition, but it has some serious backers including Microsoft, Nvidia and YG Laboratories (a skincare company) among others. The reasons behind this are obvious – the beauty industry in the US alone is expected to generate $62 billion of revenue this year. With the increasing prosperity in Asia and South America, the global market is expected to be in the hundreds of billions of dollars in the next few years.

The organizers also state that the contest is not just skin-deep but has a deeper purpose. A lot can be known about a person’s health based on his photos and since healthy people usually look more attractive regardless of their age or ethnicity, these tools can also be used for medical diagnosis.

There are many virtual assistants in the market today that use artificial intelligence to make our lives easier. One of them is Mezi, which uses text messaging to communicate with users and aims to be a virtual shopping assistant.

The app is not completely AI-driven since it also depends upon human assistants to complete its tasks. Mezi’s AI technology, called Smart Assist, uses natural language processing to filter out important information from text messages which are then passed on to its human assistants. For example, if you need to find a particular brand of leather shoes, you can just send your query to Mezi.

The human assistants then pick the three best options and forward it to you. The app keeps learning from these exchanges so that it can get better with its own recommendations. The app’s creators say that as of now the human-AI work split is 80-20 but they aim to reverse the ratio soon as the AI keeps improving.

Some of the other virtual assistants in the market are GoButler, Operator, Agent Q, Facebook M, Julie, Clara, Amy, Crystal, Jeannie and Cloe. 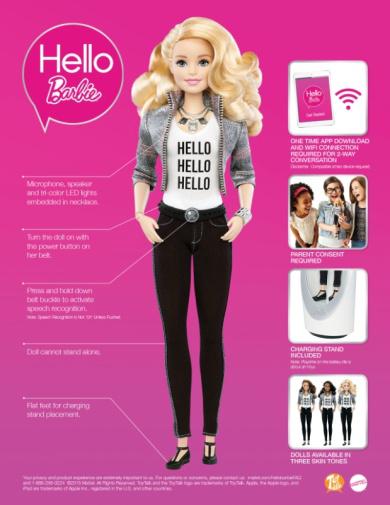 Falling chip prices, easy connectivity to the cloud and artificial intelligence are now creating the Internet of Doll Things.

A talking doll for kids might seem creepy and downright frightening for parents who grew up as kids in the 90s, having seen the Chucky movies. But Mattel believes that by giving Barbie the ability to talk, they can give little girls everywhere what they have always wanted – an imaginary friend that can talk back.

Mattel is producing the Hello Barbie doll with the help of ToyTalk, a SF-based tech startup. The doll comes with two buttons, one to switch it on and the other on her belt which kids can press down to start the conversation.

Hello Barbie uses speech recognition technology and comes with 8,000 pre-recorded lines. It also needs to be on a Wi-Fi network using which it can send the child’s speech to the cloud for analysis. Speech-recognition software then converts the audio signals into text files. Based on this, the software chooses one of the 8,000 lines and sends it back, making the whole experience very interactive for the child.

Mattel is betting on the fact that children in its Barbie-using age group will be satisfied with the conversations generated by the AI-driven doll, selling for just $74.99.

This version of Barbie can entertain children with games, stories and tell jokes. The doll can even remember the child’s likes and dislikes, enabling it to create a truly personalized experience for children instead of the same few lines that other dolls speak out.

These are just some of the ways in which artificial intelligence, including machine learning, is changing our world. Algorithms are a huge part of this change. To know what else algorithms can do for you, talk to our data scientists.