Apple Health – an apple a day, keeps the patient (and his doc) informed 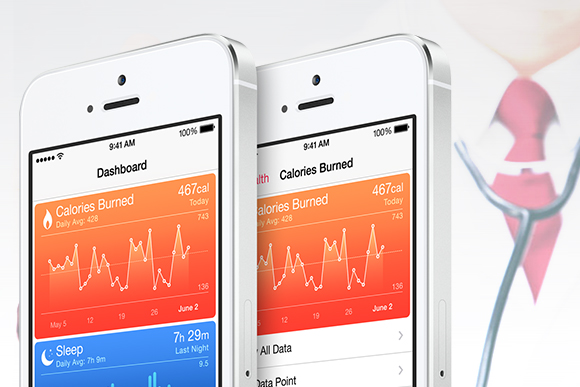 Apple’s long rumored and speculated entry in the healthcare field has finally been confirmed with the WWDC announcement of its Health app and HealthKit.
The Health app will be available with the new operating system – iOS 8, and HealthKit is the API for developers which they can use to integrate data from third-party devices into iOS 8. The framework will allow the iPhone to collect, store and present health information from apps that are designed to work with it.
Apple and the Consumer
The app is not just another fitness device for quantified selfers but has the potential to work as a mainstream medical device that can be used to monitor the health status of individuals with a variety of conditions.
The Health app will give users an easy-to-read dashboard of their health and fitness data. Measuring and viewing heart rate, calories burned, blood sugar levels and even cholesterol will be possible with the new app. Users will also be able to create an emergency card with important health information such as blood type and allergies, which will be available on the lock screen.
Apple Health even lets the user decide which information should be shared with a particular health or fitness device or if the user wants his healthcare provider to monitor a particular feed such as blood pressure or sugar level.
Apple’s Industry Tie-ups
Although Apple Health  and its developer kit is already been considered as a major game changer in the healthcare field, there are two more announcements which show how big of a player Apple is going to be in the healthcare industry.
While announcing its Health app, Apple also announced its tie up with Epic Systems and the Mayo Clinic.

Epic Systems is the country’s largest electronic health records (EHRs) company and more than 51% of Americans have an active health record with the company. HealthKit will integrate with those records to give users access to their data. No other fitness/health device manufacturer has this kind of a tie-up.

The advantage for users is that by giving the iPhone access to an EHR system, the app can actually work towards helping people that have medical conditions such as hypertension or diabetics. The active tracking of blood pressure or glucose levels could allow doctors to intervene before the patient has a medical episode. This is where Apple’s partnership with the Mayo Clinic comes into the picture.
Apple has said that the partnership will allow patients to share records and data with their health providers. This means that the app can alert the hospital proactively to notify a doctor when any of the user’s health readings go outside the parameters that he has set. The doctor can then reach out to the patient, resulting in more timely care.
Apple and the Market
Over 54 million iPhones were sold in the U.S. alone in 2013, with hundreds of millions of users worldwide. iOS 8, which will run Health, can be installed on iPhone 4s and above. This means that Health is going to have a huge readymade user base that is unrivalled by any other health app or wearable device.
Apple has already transformed the way we talk, listen to music and use our computers with the iPhone, iPod and iPad. Health has the potential to be bigger than all of those with its promise of bringing vital health information to the people and giving them power to monitor their health.