Launch of Flutter 2.2: Things you need to know about new feature updates in Flutter 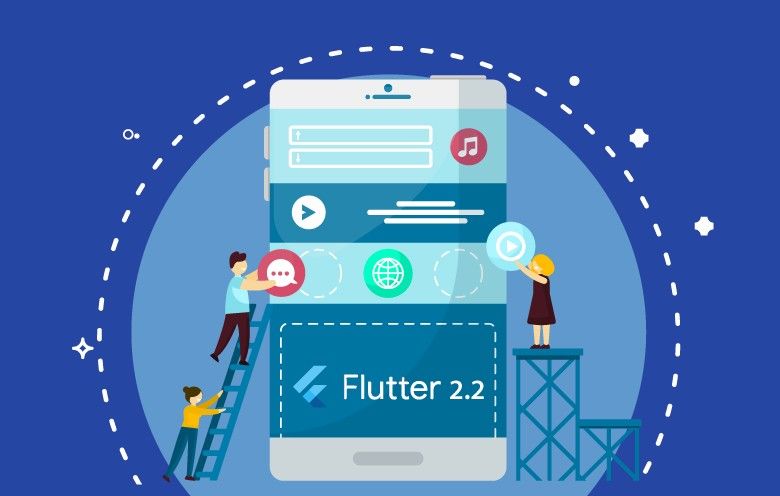 Share the post "Launch of Flutter 2.2: Things you need to know about new feature updates in Flutter"

There are over 2,00,000 apps using Flutter in the Google Play Store, including eBay, MyBMW, Grab and more coming in every day.
– Google I/O 2021

Flutter is more than just the framework and tool. To create the best-in-class user experience using Flutter, you need a strong ecosystem. Therefore, it is significant to stay updated and know about Google’s latest offerings on Flutter development services. So, in this blog post, we will see some of the new feature updates in Flutter 2.2.

The Google team has worked closely with material design to build the new feature with the latest guidance and updates. This includes support for large screens such as navigation and other adaptive improvements. Material You is the new material design for Android 12. It depicts the next design evolution, spirited with surfaces that stretch, shimmer, and move as they respond to the user’s touch.

Flutter 2.2 expands its support to more platforms with its Platform Adaptive Apps feature. With this feature, Flutter provides new opportunities to build and run apps on different platforms such as a tablet, mobile, desktop, etc. from a single codebase. The new feature will not only enable you to build apps that are multi-platform but are fully platform adaptive. Flutter 2.2 gives you the support you need to tailor your apps as per different form factors, input types (touch vs. mouse+keyboard) and screen size for platforms like navigation, system menus, drawers, etc.

FlutterFire is Flutter’s support for Firebase. It offers support for the beta release of a new Firebase product: Firebase App Check. It will protect your backend resources from phishing or billing fraud. There are a few handfuls of new feature updates to the FlutterFire plugins, including the integration of Flutter with Firebase with this release of Flutter:

Dart (Google’s programming language) is the secret sauce behind the Flutter. The new release Dart 2.13 comes with footer 2.2. It now comes with official support for a Docker image and GitHub Actions that will help in the cloud-based deployment of your business logic. This Dart update contains a new type aliases feature that includes both functions and non-functions. This will allow you to rename your classes in a way that you can give short names to long, complicated types. Dart 2.13 is now made available for a separate download.

Google has added a new, step-by-step UI for DartPad. Now, DartPad is a web-based editor for single-file dart and Flutter demos. It handles thousands of concurrent users while providing real-time syntax analysis and fast compilation to JavaScript. DartPad workshops will give you a guided workshop experience.

Google has made sound null safety the default feature for all new Flutter app development projects. The null safety feature is now available in the unstable channel along with the stable channel of the framework. With null safety, you can now eliminate the largest class of bugs/errors from your code, increase app performance and reduce package size. It will assist you to streamline type aliases and native interoperability. So, to reap all these benefits, you can migrate your apps to null safety.

In the release of Flutter 2.2, Google has tripled the speed to present the initial page transition for any app targeting iOS. The page transition in Cupertino has also been made smoother to provide a rich user experience. In fact, in the last six months, Google’s turnaround time on critical issues has decreased by more than half. They have also made it possible for you to reduce the turnaround time to test your apps and the time to install apps.

Experience the power of Flutter web

Google also announced new feature updates in Flutter Flow. It is a low code tool used for building Flutter apps, all in your browser. This will give you superpowers to build apps easier and faster with less code. The goal of FlutterFlow is to allow you to write custom code using real data from the Firebase in a WYSIWYG environment. With this new Flutter web update, you can optimize the performance of your Flutter web apps.

1. Allocation stack trace – The ability to track down where an object is allocated so that in case of a leakage, you know which code did the allocation.

What are the other new features in Flutter 2.2?

Way to go for Flutter!

Today, developers across the world are entrusting their UI to Flutter to meet users’ needs and provide them rich multi-platform experience. And the release of Flutter 2.2 at Google I/O 2021 drew the attention of many app development organizations, worldwide. The main focus was on fixing issues, optimizing performance and increasing the utility of new features announced in Flutter 2. If you have any questions regarding the new version of Flutter 2 or want to develop apps using the Flutter 2.2 platform, get in touch with our experts. You can even hire a Flutter developer to reap the advantages of Flutter 2.2.