All you need to know before hiring a Flutter developer 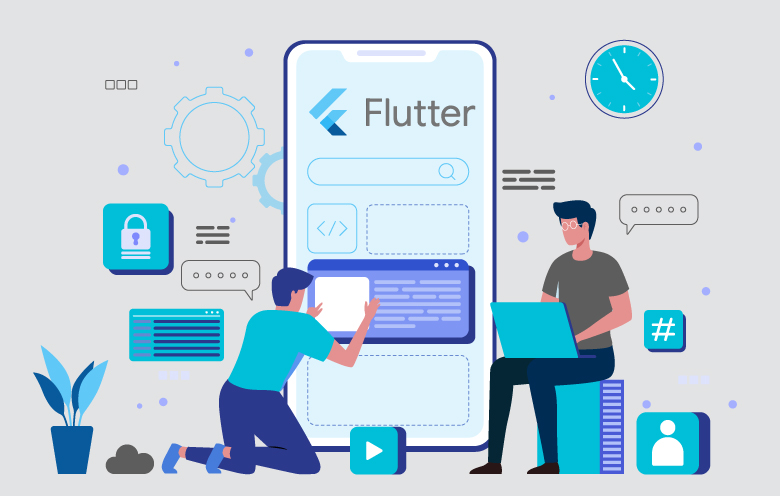 Many organizations recently underwent transformations with the arrival of the COVID-19 pandemic, which became the biggest obstacle to business continuity. But amidst the crisis, the web and mobile app markets witnessed significant growth. Several businesses realized the potential of offering their services online and switching business operations online became the norm to pull through the pandemic.

If you resonate with this situation or are preparing to launch an application but are struggling to choose the framework, Flutter can be your ideal choice to roll out a feature-rich application. The Flutter framework is powered by Dart, a programming language that makes apps run faster on any platform.

But it is not easy to build a high-quality cross-platform mobile app. You will need a team with in-depth knowledge and technology expertise to deliver an app that gives your users a native-like experience. Therefore, businesses must hire talented developers with in-depth knowledge to edge out their competitors. In this blog post, we will discuss why you should hire a Flutter developer.

Advantages of hiring a Flutter developer

Although Flutter was released just a few years ago, it is an incredible toolkit for developing apps on different platforms. It is recommended that growing enterprises partner with a Flutter mobile app development company.

This enables you to benefit from a suite of Flutter services and not compromise on the quality and productivity of your Flutter apps. They can help you deliver a unified experience, reducing the time and effort that most enterprises spend on mitigating the risks and errors of UI and security inconsistency.

Flutter is best for developing both Android, iOS and cross-platform apps with a single code base. Hence, there is no need to repeatedly write codes to make the software run on various operating systems. It enables faster app creation and saves enormous time for the developer to work on the next steps of releasing the app.

2. Build your app at a lower cost

Building a native app can be an expensive deal for organizations as developers are required to conduct multiple coding for disparate systems to create one application. Whereas a single code base offered by Flutter can help you build applications in less time that work flawlessly on multiple platforms, helping you minimize app maintenance costs.

Developers have a wide variety of plugins when it comes to creating an application using the Flutter framework. This makes the entire process of app development more convenient, speedy and flawless.

You don’t need to employ a developer to test app performance on two separate platforms when you are developing an app using Flutter. Only one version of the application needs to be tested by QA experts, so you devote less time to testing.

Capabilities of our Flutter developers

Design and develop apps – A Flutter developer can ensure consistent performance. Whether it is about planning the timeline, designing the app, or developing any complex application, you can do it in less time with Flutter. With their expertise, they can incorporate critical features during development and predict potential bugs.

Write clean code – A skilled Flutter developer can write clean code that is readable and comprehensive. The clean code will allow for the faster and proper scaling of the app, enabling the development team to spend less time on how it operates.

Participate in the development life-cycle – Building an app involves a Flutter developer working with UI/UX designers, QA engineers, project managers and others. As a result, hiring a Flutter developer is recommended to produce better results and timely collaboration with all members. They also act as specialists to help predict timeline estimates for project production.

Fix bugs – QA engineers conduct several tests to detect any bugs or malfunctions after finishing the production of each feature. Working with a well-versed Flutter developer can help you fix any issues as soon as they are detected during the testing phase.

Investigate technologies – The IT industry is constantly evolving, with new advancements and innovations being introduced regularly. As a result, the best Flutter developers can share their knowledge and creativity with you to expand and improve your application design by incorporating new tools.

Follow new trends – Continuous learning is obligatory for all developers. Flutter was initially released in 2017, but it has been already upgraded three times to date. Therefore, a Flutter developer can help you with a bunch of updates for different platforms.

Flutter was introduced by Google and focuses on the Dart language, so Flutter developers are familiar with the extensive features needed to build versatile applications that are equivalent to native apps.

Flutter enables your developers to build apps faster, integrate them seamlessly, boost performance and customize the user interface easily. While Flutter came into being only in 2017, its benefits have made it popular among app developers.

Before hiring Flutter developers, it is critical to determine the scope of the project, the hiring budget, and the amount of time you are willing to spend on recruiting and managing them. If you are looking for a Flutter developer, then get in touch with our experienced team of Flutter app development experts. At Softweb Solutions, we deliver out-of-the-box Flutter development services and have helped many clients switch their business operations online to drive digital value amid this pandemic.