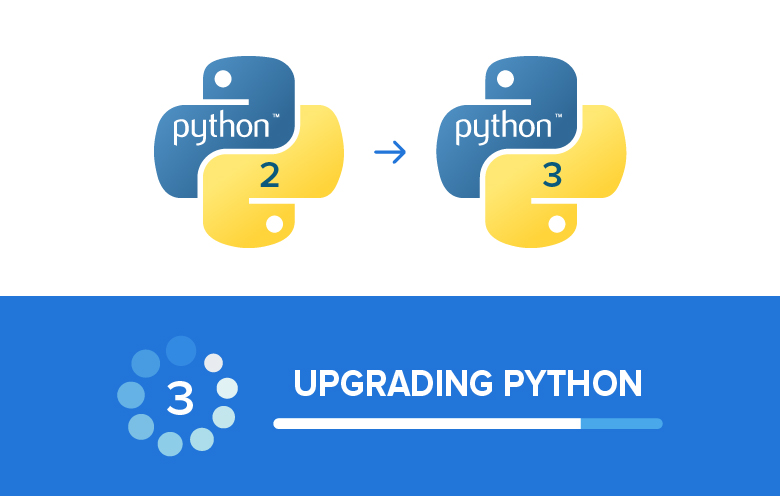 Python is one of the most popular programming languages. It is useful, easily readable and popular among programmers. After functioning for almost two decades post-release, Python 2 was shut down in January 2020. Though it is still in function, there will be no further improvement in Python 2 by The Python Software Foundation (PSF), even if any error or security concern arises.

It is now tough to maintain the applications built on Python 2, which will keep getting worse with time without any support and improvement. Moreover, the active development of such projects will become a challenge. This is the first sign that calls for a quick Python 2 to 3 migration.

Let us first understand what Python 3 is

The Python Software Foundation (PSF) introduced Python 3 in December 2008. The main motive was to solve the issues that programmers faced with Python 2. One important thing to note here is that Python 3 is not compatible with Python 2.

This became a matter of concern for programmers who used Python 2 because they had to write code considering its adaptability with Python 3. Hence, migration to Python 3 became somewhat mandatory.

But when PSF announced that they will not support Python 2 and Python 3 is the default Python interpreter, the compulsion and push for Python 3 compatible coding was emphasized.

Differences between Python 2 and Python 3

Python 3 is a better version of Python 2. Python 3 is easier to learn and implement for programmers as compared to Python 2. Shutting down Python 2 was inevitable as upgrading it and releasing an improved version became imperative.

Data security is always important. And this goes without saying – if you’re using the latest version of the software, you will have to deal with lesser vulnerabilities associated with it. And since PSF has discontinued its support for Python 2, using it will require unofficial or third-party security patches. This will require additional consideration and a manual process of application. But without PSF’s support, you will not have any backing which will leave you astray.

Python 3 is equipped with a lot of libraries that can be strictly used with only Python 3. Third-party libraries are very useful as they make the development process better. Python 2 even had these libraries, but Python 3 has better and more comprehensive ones.

Python 3 has an advanced library system that helps in the easy and quick addition of intermediary libraries in comparison to its previous versions. The new Python 3 libraries streamline and speed up the integration of artificial intelligence, machine learning and big data.

Python 2 has been the same ever since its release in the year 2000. And working with unsupported and outdated technologies is always troublesome for developers. Moreover, without continuous updates and improvement, it became mundane for developers to work on it.

On the contrary, Python 3 has a lot of new features such as high compatibility, operating system support and access to cloud services. It provides an opportunity for developers to upgrade their skills and knowledge.

Python 3 has a standard library that offers new opportunities to developers. The type safety has been improved significantly. Python 3 contains strings that are Unicode and different type than bytes. This saves developers significant time, which they used to spend searching UnicodeDecodeErrors.

Apart from this, Python 3 also provides:

What are the benefits of Python 3

Let’s take the example of Instagram. After they migrated to Python 3 along with the Django update, Instagram reported a boost of 12% in CPU performance and a 30% improvement in using memory resources. Another worth noticing fact is that Django had supported Python 2 for a very long time and Python 3 was released only after the release of Django 2.0.

The Unicode encoding method makes Python 3 more efficient and provides higher speed since all strings are made ASCII compatible.

Things to consider while migrating from Python 2 to Python 3

It is important to keep a check on a few things while migrating to the latest version of Python. Start by listing out your project’s status in terms of type, size, complexity, etc.

Let’s look at a few points that you must remember before making the move:

It has been more than two years since PSF shut its support for Python 2. And if you’re still using Python 2, beware that it is not going to support you in the long run. Change is inevitable and every programming language or technology must evolve with time.

You should take help from experienced and professional Python developers to handle the process. Please contact our experts to ensure high-quality and quick migration to Python 3 within the stipulated time frame.