Google I/O 2014: Everything that developers need to know

The main focus in every Google I/O has been on developers, and this year was no different with several important updates and announcements rolled out at the event.

Let’s have a quick look at the main highlights of this year’s Google I/O conference.

The company’s main focus with this initiative is to give developers the framework to build on Google’s platforms, so that all Android apps across all devices have a consistent look.  Google is also introducing new redesigned versions of Google’s flagship apps, including Gmail and Calendar, which will be for both the mobile and the web.

Polymer, the open-sourced framework announced in I/O 2013, was also highlighted as a way for developers to create building blocks which work with Material Design. The tool helps developers build responsive websites with its predefined, customizable building blocks.

Google has also released its full SDK for Android Wear. Till now, it was allowing developers to create push notifications to Android Wear smartwatches only, but now they will be able to create their own custom apps. The full SDK will now allow developers to get access to sensors and voice actions, which will enable them to create more voice-based apps.

Google will also be bringing Android apps on to the Chrome OS but they will be running in an Android emulator. The company has not said when these apps will be available on Chrome OS. Other updates for Chromebooks include automatic unlocking when the Android phone is around and call and text notifications on the Chrome OS.

Google is continuing its expansion in the cloud business with a new managed service offering called Cloud Dataflow. The service is Google’s successor to MapReduce.

Developers can use the service for working with streaming real-time data and can also upload batches of data into the system. Google says that the technology is actually based on a number of technologies and processes it uses internally. Google definitely seems to be aiming for a slice of the Big Data business pie when it says that it wants users to get actionable insights from their data at a lower operational cost.

The service is still in private beta mode and the pricing has still not been released.

In May, Google acquired Stackdriver, a cloud monitoring service with plans on using Stackdriver’s technology for its own cloud offerings. At the I/O event, Google announced the launch of Google Cloud Monitoring. The new service will provide developers with metrics, dashboards and alerts for the apps that run on Google Cloud Platform and also provide information on popular open source services such as MongoDB, Apache and Redis.

It also has a few other services related to the cloud.

Cloud Trace – Lets developers visualize the time it takes for their apps on request processing and how the app’s performance changes between different releases.

Cloud Debugger – Google says that this service will give users a full stack trace and snapshots of all local variables for any watchpoint set in the code while the application continues to run uninterrupted.

Google has also acquired Appurify, the startup that lets developers automate their testing and optimization of mobile apps and websites. The company was operating on the freemium model and will continue to do so as of now. The acquisition gives Google an in-house testing service that it can ask Android developers to use. The service can even simulate a specific mobile network, making it one of the most accurate and reliable testing tools for mobile app developers. 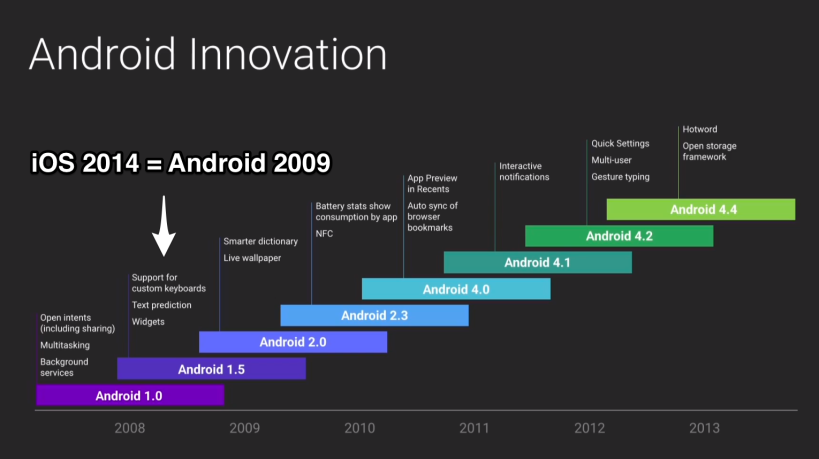 Apple CEO Tim Cook took some potshots at Google during the Apple WWDC this June. He quoted ZDNet and called Android a “toxic hellstew of vulnerabilities.” Google shot back at Apple with a slide showing an Android vs Apple progress graph over the years. Google SVP Sundar Pichai said “If you look at what other platforms are getting now, widgets, custom keyboards, many of these things came to Android four, maybe five years ago.”

Although he never mentioned Apple by name, from the slide it’s pretty obvious which company he was referring to.