Google Brillo project – Will Google tighten its grip on the Internet of Things? 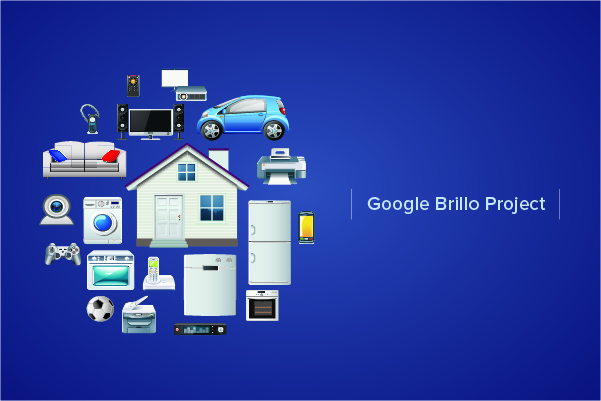 Is Google returning to the war of IoT platforms? Their second endeavor to create an Android-based new operating system for IoT indicates that they actually intend to do so. Google I/O 2015 Developers Conference held in San Francisco announces a new OS called Project Brillo which will be a stripped-down version of Android-based operating system. This software is aimed to run on low powered devices and communicate with other nearby connected devices.

Brillo supports BLE technology, Wi-Fi, and other Android-based embedded technologies. Brillo can help out manufacturers of smart products to get their products connected with other smart products which in turn allow to connect a number of things to each other. It can be any smart thing, a thermostat to smoke alarm to light switch. Google says that many manufactures may use Brillo because of its Android background ensuring a secure connected environment. It means that in the future many more device manufactures will follow suit. Though Google hasn’t revealed much of the technical details of Project Brillo, it seems like they have a plan to release it in the third quarter of this year.

Broad Support: Brillo is designed precisely for devices used for the much advertised Internet of Things (IoT). Brillo project will run through a centralized console supporting low energy technologies like Bluetooth and Wi-Fi. The best thing about Brillo is that one can utilize a wide variety of hardware platforms due to its solid foundation on Android lower level versions.

Fast Development: This super-slim operating system will let the developer have fast development because everything required is already built in so that they can dedicate themselves completely on the creation of hardware and applications.

As far as the world is heading for accepting connected world through connected devices, the Android based Brillo will drive this move intensely forward. Google is aiming to build not only an effective IoT system which is an important step towards achieving a connected world. Google expects this to the extent that they are keeping the lower-level components of Android such as the specific Linux kernel modifications and hardware abstraction layers.

In addition to this, Google is coming up with a cross-platform common language called Weave for their IoT connected devices, which will let Brillo devices, phones, and the Internet talking to each other. Weave is an API framework meant to standardize communications between all these devices. With this technology, all devices in the ecosystem can communicate to one another. Moreover, Android devices will have the capability to auto-detect Brillo and Weave which makes the future world with connected devices a reality.

Every IoT platform wants to ensure that communication between devices happens securely and seamlessly. As the Weave spread its wings to phone to device to cloud, secure communication is promoted both locally and on the cloud environment. Weave’s integration with Google mobile platform ensures enough support for Android.

A certification program on Weave makes sure that the benchmark for interoperability and quality is met and the device makers are adhering to that. Weave provides an essential set of schemas to enable flawless interaction with apps and devices. With all its capabilities, Weave can take the IoT revolution to its next level.

Nest and Nest ecosystem devices also will use Weave so they can securely interoperate with devices manufactured by other companies as well.

Project Brillo is significantly focusing on objects other than these popular devices. Both technologies can trigger the IoT revolution to bigger extent as connected devices gather more attention. The technology can be an underlying factor on several devices connected together. The devices can range from a smart oven to a dish washer, all connected and communicating to each other. From the announcement made by Google, it is assumed that Project Brillo and Weave will go hand in hand. Brillo will be made available to developers in the third quarter while Weave is expected to come in full-stack by fourth quarter.