Some essential app stores you might not know about 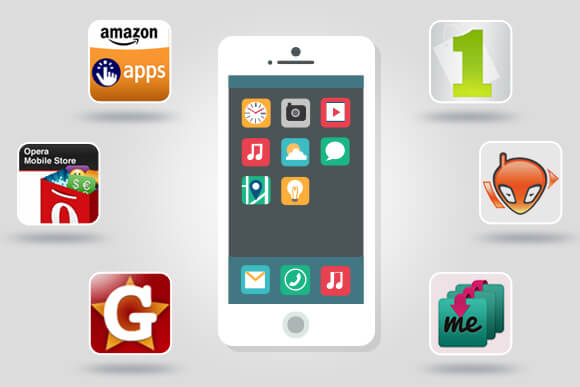 Just like the manufactured products are showcased in shopping malls and retail shops to reach the buyers, mobile applications need to be placed on the Apps Store for the users to get information about their functionality and enable them to download the apps. Once the mobile app is developed, it should be promoted to the popular app stores so that it can reach to the target audience. Most of the people have heard about the Apple Store, Google Play Store, Windows Store, and BlackBerry World. The fact is that there are many other app stores.

Google Play Store has a large share of the app market while Apple Store remains as the popular choice of the users all over the world. Approximately, 56% of app makers publish their apps on the Apple Store while 26% sell their apps on Windows Phone Store. BlackBerry World sells about 20% of the apps and some 16% developers prefer publishing their apps on the Amazon Store. Some other popular places for publishing your mobile app are: Amazon Appstore, Opera Mobile Store, GetJar, Mobango, and SlideME.

Some of the less popular App Stores

Amazon Appstore has many big name apps. As it has ‘free app of the day’, it appeals the audience who loves snapping up free apps. It is available in nearly 200 countries across the globe. Kindle Fire users prefer the Amazon Appstore rather than any other app store. Rumors indicate that Amazon is working on its own Kindle smartphone. So, developing apps for Amazon App store is a smart decision as it will help you reach a wider audience in the near future. Tech experts have seen a 500% increase in downloads of the apps over Amazon Appstore.

Opera launched its own app store back in 2011 and since then, it is a popular alternative among Android users. It has about 60 million monthly visitors and there are millions of apps available to download for various platforms. Being a browser-based app store, it serves Android, BlackBerry, Windows, iOS, and HTML5 apps. Now, it also allows the developers to bid for the downloads via its self-promoting portal.

This popular app store is downloadable on Google Play and offers paid applications at no additional costs. The developers who wish to test out the freemium version of their paid apps can publish their apps on GetJar and integrate GetJar’s in-app currency or ads. This helps the publishers generate revenue through in-app purchases or advertisements.

This popular alternative to Google Play Store was launched in 2008 and does not deduct money earned from app sales, but takes a 3.5% credit card payment processing fee. It obtains revenue from licensing the contents of its app store.

1Mobile is a quality platform made for global Android users. It offers free, fast, and reliable downloading. Users can explore the vast collection of apps and games to enhance their work, leisure, social, and personal life. There are about 60,000 strong apps and so, you do not have to worry about your application being lost in the crowd.

This independent platform boasts of 95 million downloads. Based in India, Mobango has seen an 80% increase over the last few years. Mobango includes apps and games for Android and Java platforms. On its landing page, you will come across more than 8 million users across all platforms.

With the increasing number of mobile device usage, more and more apps are being developed by business owners that can support multiple app stores for smartphones and tablets.